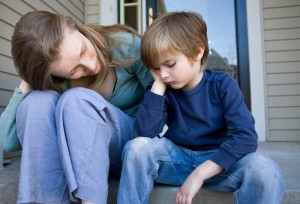 I can remember times when I was playing as a child and something would happen with the other kids in the neighborhood and I would run inside frantic and apoplectic. I would run looking for my mother who was always there. I could always count on Mom!

Well of course Mom would be concerned and try to begin to figure out what was wrong. The usual question first “Are you hurt?”

Well after Mom figured out I had a scraped elbow or knee or nothing was broken or torn, she would begin the process of figuring out what had caused this great upheaval in me.

Once Mom would get me calmed down and I would explain my earth shattering childhood event it seemed that a calm head was able to make sense of the issue at hand.

Later in life it was my Drill Sargent or Platoon Sargent that would remind me, “Calm down and take an objective look at what is going on around you.” Calmer heads usually do prevail in a time of pressure and self-declared crisis.

This is a lot harder for us to achieve though when the instigation is internal hatred or pent up pressure from events driving our National Conversation and our world around us.

I pray we can all take a deep breath and step back from the smoke and mayhem long enough to remind ourselves that  #All Lives Matter.

Today a neighbor and friend of mine called early in the AM to alert me that he had just left the Riviera Beach Municipal Water plant. He was on his way to work when he noticed the American Flag flying over a County building at half-mast.

Well, being the American my neighbor is, he promptly found his way through a maze of roads and arrived at a the front door of the building. When asked what he wanted, he told the person there that the flag was mistakenly flying at half-mast.

He was then told that it was not a mistake and that it was flying in remembrance of the SC victims. At that point, he asked if the person was sure it should be that way and asked if he was told to fly it in that manner.

Well that prompted the Government worker to remind my neighbor that his being there was a Federal Offense and he need to leave the building immediately. He did and that could have been the end of it.

Except, he called me. I verified the flag was not to be flown in that position, as per Federal Flag Code. I then called the Mayor of the City and the City Administrator. I am still awaiting a call back from them. I will update this post once I do.

Have spoken with the Chief of Staff for the Mayor’s office, She indicated among other things that she had no problem with the flag being at half-mast. She also said she did not have the ability to do anything about it. She did after some discussion and agreement on the fact that SC was tragic transfer me to the city Manager’s Office. This was after she said she really did not have a problem leaving it the flag there even after I reminded her that the flag was governed by a Federal Flag Code.

The City Manager said she would look into it. My friend will be driving by again today to investigate whether or not the flag is returned to full staff. I will let you know when I know.

I too grieve for the families in SC. I fear though they will not be the last. However, using a National symbol that has rallied many of good men to battle and into service of their community s not the way to do it. Political activism by a Government employee using the American Flag is wrong. Enough said.

Now, let me be perfectly clear. If any man is assailed in a manner that is not in keeping with just and civil behavior, I will stand with you and yours.

It seems that due to a complete lack of leadership (Mom) we have allowed ourselves to not be calm and discuss the matter with an open mind and direction.

We have chosen to retaliate against classes, races and institutions instead of against the one that committed the act and the act itself. We have divided ourselves on lines of generality and have stopped being a family.

Stand together as a people of unity or be prepared to be divided in a way that is harmful, dangerous and a worse place for our children. Open your heart and be honest with yourself. Then we can be Honest with each other.

As mom would say, “OK now dry your eyes and get back outside and play. You will be fine!”