A national consciousness is a shared sense of national identity. The principles and ideas we all believe in that make us ALL AMERICANS! Things like Hot Dogs, Hamburgers and Apple Pie and dare I say Chevrolet. Maybe a Norman Rockwell print or a Veterans day Parade. Maybe, dare I say, the Constitution. What are we allowing our National Conscience to be formed by?

I remember an event on the Illinois River called Steamboat Days. It taught of early American Culture and times of steam travel up and down the river as a means of life. I learned how to throw an Indian Tomahawk. I learned about hard tack and life as a river runner. Things that made us and brought us to where and what we are.

In our history we have done great things. We have come together to repel National Socialism in the form of the Nazi’s. We have opened the land by building a highway system unequaled by any other. We have gone to the moon and back. Not once but many times. We have setup shop in space. We have done some amazing things as a nation.

We held slaves as property. We segregated our fellow citizens with intent. We developed Abortion clinics (Margret Sanger) to sterilize blacks and kill black unborn children as to keep the population down. We fought a war amongst a divided nation.

We have done some really crappy things as a people too. But the only way that we can prevent these things from occurring again is by preserving the past. Not just the Norman Rockwell past, but the past of the slave and the Eugenics Progressives as well. For if we do not remember from whence we came, we will go there again.

I can imagine that the site of a Planned Parenthood center brings great strife and unease to a person of color. How could it not. It was developed in the spirit of human Eugenics and means of keeping the blacks from increasing in number. Even a marriage license must be a terrible thing for a black to endure. After all it was devised by a people that wanted to prevent racially blended families. So where are the cries of abuse and demands for their removal?

It is time we think for ourselves as a people. We must not allow electronic imagery to shape our conscience. It is when we all exercise our own mind and conscience as honest and free men that our National Conscience will once again invoke the image of Rockwell, Hotdogs and running through the sprinklers on a hot summer day. We must put aside our artificially engineered derision and get back to doing what we do best. We must get back to our foundational principle of each man being created equal with equal justice for all under the law. Each man having the right to exercise their thoughts, beliefs and convictions without fear of being arrested or called a bigot.

We must look inward before we look any further outward.

We are not ready for the conversations we are having as a Country right now. At least not the way they are being presented. Case in point: 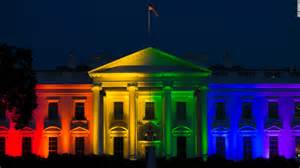 This ruling had little to do with marriage and had everything to do with control and the foisting of ideals on people. Remember, the marriage license was not around when George Washington married. (neither was the Peoples House)  It was brought about by Progressive Liberal minded Socialists that wanted to keep the white race clean.

If two people of same sex wish to marry then so be it. Just not in my Church. But that would require a two way street. It would mean that if you wish to marry then you must find a religion and a church to marry you. So how long now before our Religious protections under the Constitution become assailed by something that is not even constitutionally provided for? Marriage is not mentioned, hinted towards or even considered in the Constitution. But freedom of religion is.

Whether I think two men should be married or a man a goat and tree be married is irrelevant to this discussion. Because for me to be honest with myself I must accept that others have beleif systems that vary from mine. I must in the least allow them the right to exercise them. That is as long as they do not pick my pocket or break my leg nor infinge on my right to conscience.

So let me ask you. Do you think this two way street will flow evenly in both directions? It just might if we think for ourselves and tell the agitators to shut the hell up and to crawl back under the rock that they climbed out from. It can if our own conscience is defined, and known, then we can have these discussions. Right now though, we are not ready for what is upon us and these questions are causing great strain on our National Conscience.

Look at how national chains and politicos are taking knee jerk reaction to a very tragic event. The event was not caused by the flag. It was caused because we have a diminished National Conscience.

But for God’s sake let’s all stop the damn whining and grow the hell up. Stop letting everyone else define who we are! It is time to come together. We must identify those that want us separated as a people and be sure to dismiss them.

Unity my fellow Countrymen! UNITY ! From many seperate parts one !