If you are still adhering to your 1960’s paradigm of Democrat vs. Republican in its painted and framed glory, it is time to wake up to the new America. The agendas have wildly changed.

It is very important to remember that the Republican and Democrat partys do not exist as an official extension of the Constitution of this great Republic. They are private corporations. Their job, elect their guy, at any cost so they can control the halls of government and advance an agenda.

In truth, the two partys have become one. They have become a new third party joined not by registration but by ideology.

The idolatry in progressive America has a firm grip on all levels of the elected class and the bureaucratic government worker class. It has overtaken our educational system, the press and our public square.

The Progressive philosophy has so deeply permeated our government chambers that it has culminated in an orchestrated legislative merry go round by both sides over the past one hundred years.

While each party has contributed to these outrages and openly rebuked the other for their progressive affirmations, neither party has done anything to reverse the effects of any of them. Neither have they worked to remove the progressive institutional think and process from our midst and our governance. Why?

Simply because each equally embraces it with great self-interest and self-benefit.

Just be aware that what we allow today will be accepted as the new normal tomorrow.

There are growing levels of voter disgust and perceptions of disenfranchisement with and within the two major political tents. Each party has been losing enthused party members, because of their morally and ethically starved political apparatus.

While many still identify the two party ideologies as Liberal or Conservative the truth is that the apparatus that controls the mouthpiece of the Democrats and the Republicans are full on Progressives espousing new think, new speak and new intent.

The classic Liberal of the day and classic Conservative of the day has been scripted to the back bench and labeled as extremists or disruptive. They have been cast aside and promised scrap for their continued participation in the outright molestation of American Liberty.

It is both sides that have sold “we the people” out.

Then there are those that have been politically and civically “asleep”. They are also one of the causes for the failure of the political process. I am not sure you can convince me the process has not failed.

And of course the fourth column, no longer being the guardians of truth are delivering progressively biased analysis and messages to anyone they can convince or reach. And leaving short the discussion of the educational system and welfare state in an interest of words is enough to include them.

As party members we too have involved ourselves in and even made our raison d’être the advancement of our political party and its stated outward agenda. We were supposed to be awake and on guard as well. We have more blame to be placed on our shoulders than do the ones that slept.

And now while many of our once sleeping fellow Americans are waking in great number from a long political and civic slumber and asking, “How did we get here?” and screaming, “Somebody get me out of here”, the voices answering them in the dark are not Democrat or Republican. They are Progressive wrapped in your party colors and labels. Those voices are also very dangerous to our way of American life.

We trusted our leaders. We trusted the system would work with our input. We trusted that the promises being made and the scraps thrown to us would somehow be enough. We are told the other side is evil and that we have to promote our side or the evil ones will rule. Well guess what? Both sides are equally as evil. Both sides see you the average American as an impediment to their agenda.

The elite party architects do not want your participation in the process. It is easier for them to control a smaller number of loyalists’ than free thinking objective voters. They need just enough to “win” for their side in order to advance their self-interest and deception.

Our political tents, which are really private corporations, are dressed in a way so we only see the label and not the stitching that hold them together. Over many decades the party structures have been filling the politically active member’s heads with busy work and worthless pabulum in the form of legislative promises that never arise.

Instead of honoring their responsibility to America and her future, the party elite have been filing the pockets of politicians and faithful loyalists along the way in an effort to create some type of twisted loyalty to the process.

The two party structures are starting to look ragged out. The big tents façade is ripping.

And those recently refreshed from a long slumber are waking to find voices that will fulfill their anger and angst from inside. They feel duped that while they were enjoying their political and civic siesta, the American Experiment turned on them while others enjoyed excessive munificence at their expense.

They are screaming out of that same anger and angst and are demanding that it be “set straight“. They are scared. They are angry. They see the writing on the wall. And it is not “R” vs. “D” rhetoric they see or that scares them or makes them angry. No, they give little heed to your party rhetoric.

What they see after having arisen from a Rumple Stilt Skin style civic sleep is the same approaching storm we see. Many have seen this storm cloud forming for quite some time. Others just laughed while most slept. The storm has been produced by our lack of principled governance and outright camouflage of principles. 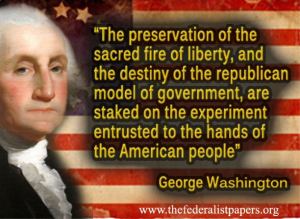 During the last half century a lot of American citizens declared they did not care anymore. They said they did not have time for politics or ethical debate in the public square. They went merrily along in a consumer’s paradise. They did so all the while believing that our destiny and future freedom would be tended to by those promising to fulfill their civic, political and legislative agenda in a way that is keeping with the principles that we have established as a people. They believed our grand experiment was too big to fail. Well guess what? They lied to you and it is failing.

True servants to the American Experience would have been guarding Liberty so it could be enjoyed as expected. Instead most have been raiding the treasury and redistributing the nation’s wealth to a league of elitist criminals and morally deprived men; all the while hiding behind the Flag and their political party. Many of these elected and party classes, at all levels, have been portraying virtue while stabbing you in the back.

All the while our public institutions of debate, religion and social guidance have let their voices and faith be muzzled. We have let our principles be buried.

We were taught that our political process was going to protect these ideals and values so we could just go about our day to day and enjoy the pursuit of those things we enjoy and desire. Instead, like Congress, “we the people” ceded our responsibility. We no longer stood guard.

We allowed the construction of two big towers of concealed Progressive darkness painted in the Red White and Blue on the outside for all to see. One with D on the door and another with an R. The door to the inside of the upper floors of these towers has been locked for a very long time. And now a bridge has been built at the top between these two towers of institutional inertia in an effort to advance the progressive agenda.

Liberty and freedom are in great peril because of these actions and deceptions. We are a short walk from the long winter of National Socialism in America. This winter is nuclear in scale and has the potential to create a great cold amongst our nation and her people not seen since the civil war.

To my constitutionally grounded and principled fellow Americans of any political label, I offer to you that we are in some sense in this together. I also lend that in a way we are extremists. I say to you that if you are not taking heat for criticizing the machines that are destroying our social order and moral fabric, then you are part of the problem. Better yet, you are fuel for their continued existence and the continued looting of our national treasure.

If you promote an ideal that is opposed to the establishment agenda and display a potential to actually ACT to fight for that ideal, then you will eventually be labeled an extremist.

We are a threat, yes, but only to the progressive power establishment and their collectivist hordes that threaten our Constitutional sovereignty.

To be an extremist in the face of open conflagration against the principles of freedom and Liberty is to be on the right side of history.

Just make sure you know the ideals, principles and morals of the team you’re siding with while fighting back the existential crisis called power, greed, moral deprivation and Progressive idealism.

Is it our destiny, or political curse, to have to choose between the lesser of two evils at election time? Are we terminally incapable of acknowledging a fundamental truth: that democracy will never take hold until we change the undemocratic process that keep us in chains… and learn to govern ourselves, selflessly, for the welfare of all?

There is a solution. It sits before us all. It is mathematical in principle. It is simple in reason. It is there for the taking. We just have to decide to make it happen. Remain Independent in your thinking and question your leadership with great boldness.

It was never meant that our government be our moral guide or keeper. It was meant that a moral government preserves, protects and defends our Nation so that we could be a moral and principled people. We look to morally principled men to guard our liberty and freedom, not to legislate it.

We have traded the stages, scripts and directors of our cultural pillars away from “we the people” and into the hands of progressive rebels. We have eliminated our participation in public influence and debate, discussion and free thinking from the care and management of our society to the “government”.

We have ceded our Liberty as a people and fall shackled not to the phony legislated ideals, principles and morality of governmental edict, but to the legislators and their keepers interests.

Government, legislation, regulation and politicians are not our salvation. We will not solve anything in America by asking those that caused the problems to fix them.

Let us not follow in a world that is to be viewed through the lenses and filters of the Progressive agenda. Let us not look to the elected for answers, we must look to ourselves and the principles of the Constitution.

Be a light in the darkness of this political tumult. If not for others than for your own self honesty so you may resolve within yourself the truth. It may be all we have left.

Remember, when the watchdog sides with the wolf, it is the sheep that are the victims.