As the Progressive element in the Republican Party works to expose itself and its agenda, let us not be divisive. I ask that you please stop supporting the positions of our Senator from Florida, Marco Rubio. The majority and core of our party know that his stance on Libya, Syria and Immigration, and his alignment with Senator McCain, Graham and Schumer have placed him in the light of the “Naked Progressives” and have removed him from the “Main Stream” of our party.

So I ask, please, in an effort not to be divisive and further separate our party, please stop the irrational support for Senator Rubio. It can only lead to greater division. We all know that the Senator made promises to us and has broken those promises. We know that he has aligned with the power structure in Washington, DC that is eating us alive. So further support of him is in direct contrast to what our party stands for. Sometimes good Republicans turn against their party. It happens. 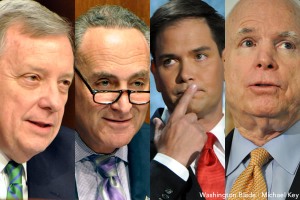 Remember, we have elections coming up and we do not want to be divisive in anyway going into midterms. So, let’s allow the good Senator the opportunity to enjoy his tenure and you and I can continue to identify those that will not betray the common core beliefs of our Party.

It is time to go along so we can all get along. After all, it is the majority that feels this way.

On a separate yet related note. Some have asked me how they can tell if someone is a Progressive. Let me answer that by saying that if you watch in debate, meetings and other communications for signs of bullying, alienation, or lack of a position, those are good signs the person is PROGRESSIVE. Let me expand a bit. When a person stands and has a view or opinion that is in conflict with a PROGRESSIVE ideal, the progressive quickly attacks. They will say you are out of order or out of line. They will call you and obstructionist or blame for injuring their party.

Be careful these people. You see, they cannot do otherwise because a progressive ideal has no foundation or ethical merit. They have to silence you because when you speak of Republican Values or ethical or moral ideals, they cannot win. So, instead they gavel you down or bully you into submission. They will compromise values to justify their lack of spine. Most of the time they try to make an example of you by alienating you. This sets a tone of fear and others are afraid to contest the PROGRESSIVES ideas.

Keep your eyes and ears open. They are not hard to identify. The next time one starts to use these tactics instead of offering plausible alternatives or basis for discussion, you know you have one in your sights.

2 thoughts on “Please stop being Divisive”