It has been said you will know you are over the target when all hell breaks loose. If that is the case then the stories about Marco over the past few days are most certainly over the target. So, bombs away!

The shots have been lobbed from two angles. One is from the loyal smitten Rubio loyalists. The second is from the establishment types that are screaming “Sit Down and Shut Up”.

So my establishment friends because you disagree with me and me with you, I feel it necessary to mention that it is the Constitution of the United States of America that gives each of us the ability to openly do so. Fortunately our Government does not get to pick and choose the parts they think are convenient for them.

As a person that has taken an oath to uphold the Constitution, I find it troubling when Politicians and citizens are willing to cede their freedom in the name of safety. It seems they are acting from a position of fear and weakness and not great American Exceptionalism. We either believe in the strength of our founding documents or we don’t. We can have that debate later, but first let’s stay in the lines and make the country stable again.

In terms of not taking a candidate to task because of their party affiliation, I again must disagree with you. The obligation of each of us is first to the Nation then the Party. Our goal is to help elect our party members that support Constitutional limited government, nothing more and nothing less. 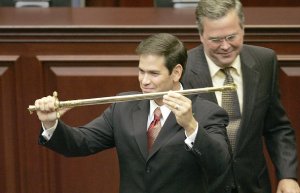 When we become consumed with Progressive minded left leaning candidates like Marco, Jeb, Huckabee, etc., we are doing no service to the country or our party by not identifying them for what they are.

These candidates are Progressive in their agenda and have done a great deal of harm to the GOP through their actions.

And now it seems again that Marco has taken another position on Constitutional practice that is strictly feel good and meant to sensationalize.

Sen. Marco Rubio (R-Fla.) said Thursday (Thanksgiving Day)  that he would be “supportive” of Congress issuing a formal declaration of war against the Islamic State.

Appearing on the “Today Show,” Rubio said that the terror group had declared war on the U.S. and that he would be happy to return the favor.

A ‘Declaration of War’ is an act by the Congress declaring war against another nation state. Since there is no ‘state’, it’s unclear if a Declaration of War would apply since the ‘Islamic State’ is not a recognized state, indeed doing so may legitimize a claim to being a state.

At least we know Marco can say the word war and Islamic State. That is a good start.

The issue here is a historical demonstration by young Mr. Rubio that he does not have the depth of Constitutional learning to be President. His declaration that general warrants are needed and that declaring war against a terror group are just two examples. A third is Amnesty.

Let us look at the matter from a perspective of vetting a “Presidential” candidate, something we have done very poorly for the past 30 years.

America is at a crossroads. We do not have time for a Junior Senator to get OJT in the White House.

There are other candidates that have a greater depth of Constitutional experience and knowledge than Marco, Jeb, Dennis and the Progressive ranks.

Marco and the NSA

Marco and his AMEX