According to the ancient philosopher Aristotle, “Nature abhors a vacuum.” Aristotle based his conclusion on the observation that nature requires every space to be filled with something, even if that something is colorless, odorless air.

Colorless, odorless air is as close to the best example we can reach without being crudely offensive. Because the truth is that the air is filled with a horrible smell.

For far too long the political process has become nothing more than an engineered game between political parties. Each side has been pitted against the other for no other reason than to move Woodrow Wilson and the Progressive movements’ agenda to the endgame. And that end game is the fundamental transformation of America.

The messaging from each party has been a façade hiding a hollow shell of principle. Each major party has been consumed by progressive ideological leaders. We have been force fed the idea that we have to hold our nose and take a little bit of a bad thing in order to win. And over time we have given away the country, constitution and our collective soul.

There is enough blame to go around. Both parties have abdicated their responsibility. Both parties have smashed the bedrock of principle they stood upon. Today we are sinking from the tremors of the sucking sound called Progressivism. We have turned into a system of management and not representation.

As evidence to the anger and the lack of truthful debate by the political party’s one need look no further than registration. Florida is the third most populous State in the Union. Florida has Sixty Seven (67) County’s. Of those sixty seven (67) there are thirteen (13) that have more Non Party Affiliated registrations than either the Democratic or Republican Party. That equates to twenty percent of the county’s. This is to include most of the major population centers and largest voter registration centers.

There have been growing levels of voter disgust and perceptions of disenfranchisement with the two-parties, while at the same time we have been losing enthused party members. Repackaging platitudes and gimmicks will only result in more failure. We must have real, honest and truthful messaging at the core of our character.

The political process has been replaced with physiological profiling and micro messaging. We have replaced our values with interests. We have confused principle with platitude. 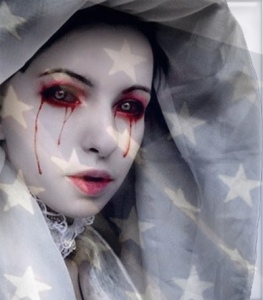 Our past decisions have ended with consequences so serious that we are now standing at the edge of the end of the Republic. We have abandoned our principles and become trapped in the sediment of the river of politics. We are being overtaken. Our political system has become infected.

The choices we make today will determine the future of the free world.

Our job as Americans is to begin turning the American political process back towards foundational truth and away from the populist trend that we call politics. If we allow ourselves to be consumed with progressivism as the fill for the vacuum, we are done.

It is incumbent upon members of both political party’s to remove the Progressive element in their ranks. We need to work at the local, state and national levels to chase the Progressive roaches into the light. We need to force them to place the letter “P” next to their name and registration. We need to tell them to get out of our party’s. We need to expose them and continue to do so. We need to let them know that we are not going to relent.

We as Americans have to reclaim the political process so that the vacuum does not fill with any more anger, division and destruction of America. If we elect a populist progressive just to win for the party then we will be responsible for turning our Republic into a National Socialist Nation.

If you find this message offensive and think that you should elect whoever has your letter next to their name because they are better than the other side, you are part of the problem. We need to nominate and elect candidates that hold America and her foundational principles as the basis of their belief system and not their political party. We need to stand and denounce the progressive element and expose them for the cancer that they are.

1 thought on “Strong Man or President?”