Much to the consternation of the political establishment strategists and global planning progressive elitists, the politically apathetic are being brought to life once again organically. Or maybe it is part of the larger agenda. Either way, their slow resuscitation is being caused in great part by lower wages, fewer jobs, debt, endless wars, corrupt government and just an overall lackluster shine to the American Spirit. They are known as the newly awakened.

Not so many months ago the major question asked by anyone halfway politically aware was “What is it going to take to wake these people up?” I guess the answer was a maximum limit to their pain!

I mean really, it seemed time and time again that “this surely will wake them up” type events have occurred and still mainstream America had no voice. No they were happily humming a song and singing along because everything was fine. Well at least that is what they were being fed and they did little else to verify the facts. Until, the reality of the economic and cultural decline started showing up in their home and their community.

As it turns out the once apathetic and flustered American woke up pissed off, in large numbers I might add. They sensed that someone was starting to mess with their happy blind relationship to the materialistic free market American dream. In other words, they are broke for the most part or are working like a beast to stay even. I get it. To quote from a previous post:

“Apathy does not make us stupid.  On the contrary, a great deal of energy is used to offset the world and hibernate in an apathetic state of existence. Apathy requires an acute awareness of the obvious. It is what drives some to having a broken “give a damn”. Many can only cope with the influence of the pressure of reality by excusing themselves from it and gathering in flocks for comfort. They yearn for a sheep dog.”

And now they are awake, angry and wanting revenge against whomever shattered their illusion of American integrity. In most respects some have herded together and really are angry political mobs. 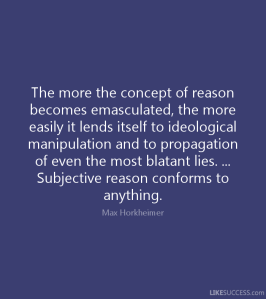 For years party elders purposefully repressed party size to the smallest controllable yet winnable margin possible. Why you ask? Because it is easier to control a smaller number of loyal people than to control a diverse mass of humanity. Well, at least when you are full of anything but the truth.

Political establishment leaders breed apathy to suppress over participation. Sometimes knowingly and other times occurring as outcomes of behavior.

The political Establishment leadership is every bit as blind as the newly awakened once were. They are blinded because they have been substituting their own self-honesty with self-justification. In other words, the ends justify the means.

And now the political establishments are facing their own head on march of the zombies. The newly awakened are on both sides of the DEM and REP camps and in the Independent and third party ranks. Neither party has even the slightest idea how to deal with the energy in a principled and constructive manner either. Nor can they see a way that will produce a viable and realistic outcome based in honesty and truth. And without it they continue to decay.

We do not need to stand as an organized body of politics, culture, race or social status until we can stand as individuals determined to exercise and preserve our rights of natural existence. We need to stand as an American. This is step one: “The Individual.”

Stand in example. Be the individual. Be honest with yourself, then stand for your principles whether they are the same as mine or not. Be self-honest in the process. Refuse to impugn your honor; the rest will follow for us all.

Your perspective may very well be different than mine. That being said, it is not negative, as long as we each focus on common ideals and principles with a measured degree of self-honesty and I might add civility.

Our family, culture, religion, country and world slowly grow and thrive or rot like a potato in the hot afternoon sun simply because of our choice to be or not to be self-honest and principled in the foundation of truth.

It is up to each man to make this world a better place. Not a politician or government. It is not a collective of individuals that makes us great. No it is collectively the individual that is the backbone of American Greatness and exceptionalism. It seems to me that honorable behavior is the least I can do to fulfill my civic obligation to my fellow man in the process of preserving freedom and liberty.

“If a man is to be free, he must be honest with himself. It is when a man is honest with himself that he can see the encumbrance that impedes his freedom. For freedom to flourish men must also be honest with one another. It is not until a man is honest with himself that he is able to be honest with another. In that honesty both men are able to find truths. It is from honesty that truth springs eternal. When men do not encumber the truth with themselves they further their own freedom and define greater truths with those around them. As truths develop and grow between men, a trust forms. It is an honest individual that may share truth with another. And in that truth one will know they are able to trust because they have seen and experienced the honesty and same truth another has shared with them. When trust is nurtured a relationship is formed.”

5 thoughts on “The Newly Awakened”